Laptop in SIN time and that is 6hrs ahead of Norway. Imagine after being in SIN airport’s Butterfly Garden departing SIN Mon 27 May 1700hrs to the contras experiences as described below…

As I was just saying to a young lady about life being a full colour spectrum, and blue is one of them, just like my jet-lagging now. Trip from SIN-JED on SaudiAir was quite an experience without realising that there was a mini hajj going on in JED. The whole plane was packed with Allah worshippers from SIN, Malaysia & Indonesia. There were 5 Caucasians and me the only Chinese!

Being the last to board, took the chance to selfishly grab the middle seat of an only row without anyone and placed my stuff on both sides, thus having some space in this alien atmosphere! SIN-JED, 9hrs and ouch, the movie channel was down!! Layover in JED 5+hrs and the airport was NOT what I saw online. Probably the domestic section is what is shown online while the international is another something else. Anyway could barely keep my eyes open…

Flight from JED-LHR 6hrs and again full plane, and again only Chinese with the same 5 Caucasians. This time was in the aisle seat with this overweight Arab who kept jabbing his elbows on me, even with a pillow placed by the arm-rest. The headphones did not work this section and there was no point watching movies with Arabic subtitles. Took a sleeping aid and dozed on and off. 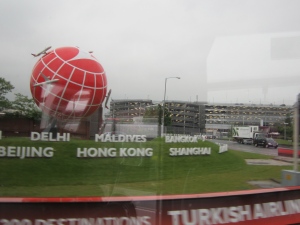 Arr LHR/London 0700hrs Tue 28 May. After immigration and baggage claimed, caught the 0845hrs National Express coach GBP30 S$57 1hr 25mins to STN/London Airport (2 pix) to connect with RyanAir to RYG, 1hr 50min in the air and 1hr on the coach from RYG to OSL, NRK170 S$37. Arrival OSL Tue 28 May 1800hrs, where it is 6hrs behind SIN. Is all this worth saving S$300-400??? Not so sure at this stage in life even with new experiences but what is worth it all is to see Olai (mini May) who a delightful and happy child understanding bit and pieces of English and Norwegian.

Subjective observations and comments on this recent journey without derogatory or racial motives or thoughts. After years of globe-trotting, must say that both the Muslims in Malaysia + Saudi Arabia and the Chinese from mainland China have some things in common. The people, public areas and restrooms can do with much improvements. Perhaps this is due to being more accustomed to the Western civilisations where social conscience and courtesy are more pronounced.

Taking me hours to do the pix and unable to get colour text. If possible will try to  edit quotes and family names in the correct colours… so unhappy with Mac 😦