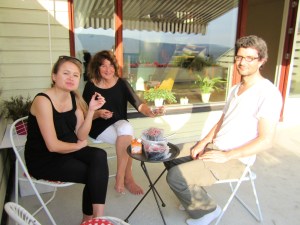 What a mixture for both weather and events; grey gloomy Fri, like the stock market and beautiful sunshine yesterday. Nice to catch up with M&B and Berit with an afternoon visit for dinner and to view the baby’s room which is now ready for our common grandson due next month.

Thu: took a walk to Sandvika, but not the trail originally planned which is more in the woods and by the river. Somehow somewhere, told a wrong turn but resulted with interesting experience. Had to walk pass Bærum Hospital and Martina Hansen Hospital, a private hospital, built 1936. Took a little tour around MH as I have never been there. There is a pix of L&M paternal great-grandfather, John Kløve HALD (1893-1969) who was one of the founders and the first orthopedic surgeon there. 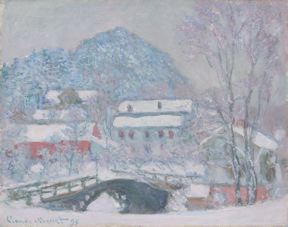 Løkke Bridge (1829), the oldest cast iron bridge in Norway is located in Sandvika over the Sandviks River.  The iron was cast at Bærums Verk in 1837. This bridge has been an inspiration for many painters including Claude Monet. The bridge painting was done in 1895 and it is private collection but can be viewed at the OSL National Gallery. Also discovered a Kolsås painting by Monet! 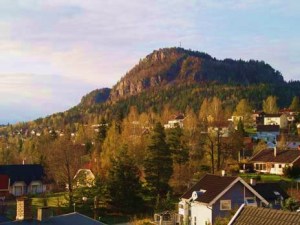 It’s on the strength of observation and reflection that one finds a way. So we must dig and delve unceasingly – Claude Monet