To my delight,  Isbilen=The Ice Car was in this neighbourhood when I got back from the short walk. A mobile van stocked with frozen foods for sale. How convenient for people like me who does not have a car! It announces itself first by a text message on the mobile phone and then it plays in a musical-box style tune when it is driving around the neighbourhood. Grieg’s Norwegian Dance No2 H264 is used here, which was and still is the music for a TV documentary named Norge Rundt=Around Norway (started 1976) which shows and teaches about Norway. Educational and highly recommended!

Sun:  started as a nice red sky in the morning. Got on the first 08.21hrs bus into OSL Bus Terminal where you can find a bus to take you to just about anywhere you can connect to EU. Interesting wood carving on the wall.  Exterior bridges (good idea if these bridges can be closed during bad weather days!) connecting to OSL S/the train station. Who in the world would name their cafe such? An attention seeker and unforgettable name incase you need to meet someone in that area 🙂

OSL S is under renovation, looking forward to seeing it when completed. Remember it as a grand old yellow building and hopefully they will managed to combined the old and new without destroying the old. The new section is connected to the Opera House by an overhead bridge.

Met with M&B at OSL S@09.30hrs. Drove S to E6 by passing Moss, over Vansjø Lake, inland E to the Swedish border and to Nordby Shopping Center (1hr 30mins drive from OSL). It is 4km from the border and the nearest Swedish mall to Norway; 110 shops on an area 83,000m² as compared to that of Sandvika Shopping Mall which is NO more Scandinavia’s largest shopping mall with 190 shops in the area of 60,000m². Just read that it has been overtaken by another shopping mall in Bergen!

Like any other mall, the weekend crowd was awful but thank goodness we started early. Certain stuff there are cheaper. Lunched on fast Turkish food. M&B ended with a baby stuff, food and paint (half the price as compared to Norway but limited choice of colours). As for my purchase, it was mainly foods and washing detergents, nothing exciting. Looks like the small bedroom in the house will be painted to a Basilika green sometime soon! 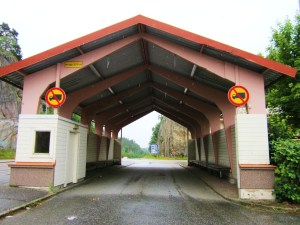 Left app 1300hrs against the traffic lines and more people. Word for custom/immigration is tull in Swedish, which means nonsense in Norwegian! The Norwegian word is toll and there was not a soul to be seen there! The sky opened up and it was pouring all the way back to Norway. Appreciations to M&B to yet another experience and tkx Bjørn for the portable grass-cutter. How considerate, especially when the last cutting was done by a pair of scissors! Blister on the finger to show but all is good as it is healed. Again to show that time heals all wounds but the scars will be there 🙂 🙂

Red sky at night sailors’ delight; red sky in the morning sailor’s warning, a saying that proved true for yesterday. A good week to everyone and as FB friend Jack commented, MGIM/my god, it’s Mon but before you know it will be TGIF 🙂 🙂 🙂