Grace of Monaco is focused on the personal story of former Hollywood star Grace Kelly during a dispute between Monaco’s Prince Rainier III, and France’s Charles De Gaulle over tax laws in the early 1960s. Nicole Kidman stars as Grace Kelly with Tim Roth as Prince Rainier III and both did not convince me enough to me keep the mind from wandering…

Thu: appreciations to Sue for dinner with Ivy at Don Quijote Spanish Restaurant/Dempsey Hill, my third time there and food is still good. We had 5 dishes of tapas including the Calamari Fritos and Garlic Prawns and a small Paella Especial Don Quijote with a good amount of fresh seafood but somehow something lacking in the rice! Shared a jug of red sangria which compliments the food.

NO NO NO to bullfights but YES to good Spanish foods and wines. 1973 – 1st trip to Spain with father who wanted to watch a bullfight. Young, idealistic and completely ignorant then, agreed to go along not knowing what it was about. Father was so embarrassed with me. Felt so sad and sorry for the bull that all I could do was just cried and shouted boo thru’ out the fight.

Spain’s Catalonia region bans centuries-old bullfighting. So let’s hope and pray that it will also be banned from the rest of the world…

Fri: a grey and drizzly day, good for walking. Thanks to Clem for the Affordable Art Fair located at the F1 Pit Building (next to the SIN Flyer), happy to be in a new area to explore. Most of the art there did not really talk to me but art is a personal thing and this Affordable Art Fair is really not so affordable as you need to buy a ticket to get in! Contemporary Art Fair will be more appropriate! And again affordable is relative and so are most things in life… 🙂

Alison Pullen/Quantum Contemporary Art: her interiors are achieved by painting onto magazine pages of interiors. The result is an image of the room which is dominant, but coexists with a foundation, the photographs of totally different rooms beneath. 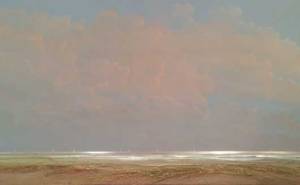 Stiliana Alexieva/Quantum Contemporary Art: her unusual highly textured mixed oil on aluminium panels give a striking illumine effect for the sky and sunrays. Also the waves in the sea are quite beautiful with a 3D look.

These few pieces are pleasing to my eyes are not within the budget – 6K and above!

Some fun cheerful and colourful designs too…

Was contemplating a walk to the Marina Barrage via Shears Bridge and the golf course. Decided against it as the staircase up to the bridge had barricades around due to constructions. Instead just enjoyed the views of the dragon boats out for their practice.

We believe that the Dragon Boat Challenge is an excellent opportunity to promote involvement, teambuilding arts and recreation –

One thought on “Affordable Art Fair 2014”