Thought that for once this will be a posting completely about SIN, but sadly more bad news from the US: ‘Like a nuclear bomb’, deadly fertilizer plant blast devastates Texas town…

AsiaOne.com: the Government’s latest move to ease congestion during peak hours by rolling out free train travel to the city before 7.45am has been applauded by some commuters.

But others were sceptical about whether the dangled carrot of monetary savings would be enough to make people leave for work earlier. This is because some employers may not be flexible enough to allow their staff to start – and end – work earlier. Early birds could end up working longer hours.

So will this be a solution to help ease with the crowds? Time will show. Whatever, but will not be with the crowds. In some countries, seniors go FOC on public transport. Hope that it can happen here soon! Pix above are downloaded from various sites. Walking will be my choice if caught in rush hours! 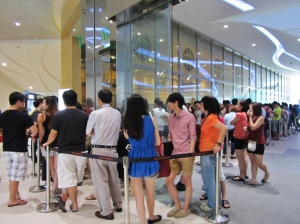 Was in Plaza SIN to catch a movie and took these pix of the lines for this recently opened Tim Ho Wan 添好運 Dimsum. A chain of dimsum restaurants from HKG helmed by Chef Mak Kwai Pui, which has earned itself an entry in the Michelin guide with their delectable dimsum. No matter how fantastic their dimsum are, NOT about to Q for hours. Perhaps when the novelty dies down, might find time to give it a bite!

Being a local production and in spite of the title, Judgement Day**with Mark Lee, one my favourite SIN actors, had to see it! A doomsday drama centring on several characters as they decide to share their deepest secrets when it is believed that doomsday will happen in 72hrs. Miraculously, doomsday did not happen and everyone survives. While the whole world rejoices; for those who made irreversible decisions, it is the end of their previous world…

Conclusion: with the downloaded above pix of Chinatown, Botanic Gardens and Bugis, people in SIN (and most of Asia) seem to like crowds and to stand in lines… 🙂

Where ever you may find yourself, even in crowds or Qs, have a wonderful weekend.

Solitude is strength; to depend on the presence of the crowd is weakness. The man who needs a mob to nerve him is much more alone than he imagines – Paul  Brunton