The Dingle Peninsula is named after the town of Dingle. The peninsula is also commonly called Corca Dhuibhne which means seed or tribe of Duibhne. This is the most western part of Ireland and the village of Dún Chaoin is often jokingly referred to as the next parish to America 🙂

There is no other landscape in western Europe with the density and variety of archaeological monuments as the Dingle Peninsula. This mountainous land juts into the Atlantic Ocean has supported various tribes and populations for almost 6,000 years. 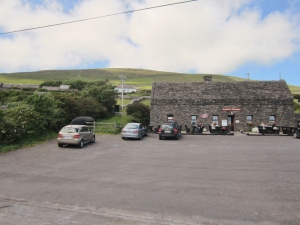 The Stonehouse Cafe & Seafood Restaurant***located at Fahan, Ventry on the Slea Head Drive serves a delicious fresh local crabmeat sandwich with a view. This unique building boost the only stone roof building in the world according to our host David who wishes us céad míle fáilte/100,000 welcomes. To David, 100,000 thanks for delightful service.

David Lean’s 1970 film Ryan’s Daughter*** took place at a village on the Dingle Peninsula in the immediate aftermath of the 1916 Easter Rising, and was partly shot on location near Dún Chaoin, Coumeenole Beach.

Road signs to confuse you totally, so there is no choice but to slow down 🙂 🙂

The Town of Dingle was founded by the Fitzgerald and Rice families. Extensive trade with France and Spain was the main reason for Dingle’s importance, and also the town was a embarkation point for pilgrims on their way to Santiago de Compostella. 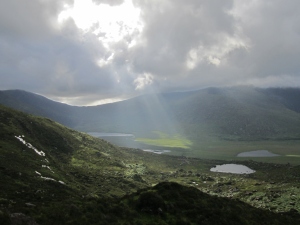 The Conor Pass, which runs from Dingle on the southern end of the peninsula towards Brandon Bay and Castlegregory in the North, is the highest mountain pass in Ireland, a tight, precarious road, weaving its way around the sharp cliff faces and past the high corrie lakes.

100,000 thanks to Catherine Bronsnan for everything.

Ar scáth a chéile a mhaireann na daoine/Under the shelter of each other, people survive = There’s strength in unity – Gaelic quote

One thought on “Happy Mid-Summers Night…”