Sat: appreciations to Jeffrey for breakfast company. Tkx to PriscillaTan (friend of Jeffrey) – this stick-looking leaf tree is a Pencil cactus – a type of ornamental succulent. Botanical name, Euphorbia Tirucalli

A new discovery – Bread&Bun Bakery and a fresh produce stall YeowHeng Fresh Vegetables & FruitsSupplier@JlnTuaKong off EC Rd. Tkx to Jeffrey for the ride to SBG.

Today starts the 2018 SIN Orchid Show@SIN BotanicGardens/SBG, a place for orchid fans. In the 1950s, 12Uncle John LAM TinLeun who immigrated to HI in the 1960s was one of the pioneers and founders of the orchid society. 2003 – SIN Orchid Festival/SOF@SBG where I helped to set up; 2004 HKG as a member then of Orchid Society of SE Asia/OSSEA. 2011 WorldOrchidConference/WOC

Has been quite a while since the last visit (before 2013!), and some changes since then.

Nice to see the old heritage familiar trees and the good-old iconic bandstand again, these were and still are here since childhood days.

SIN Orchid Show – wonder if they will acronym this show SOS???

The orchid’s association in Chinese culture with such virtues as elegance, good taste, friendship, and fertility goes all the way back to Confucius himself, who was said to have a particular attachment to the flowers – Lawrence Osborne 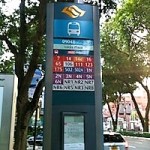 Today must have had the most eventful SIN bus-ride ever – 3pix downloaded, bus106 by Gleneagles Hospital to LuckyPlaza/Orchard Rd; would got off@BrasBasahRd to change if not for the incident below –

Not a Ship of Fools but a Bus Of Fools: a foreign worker, his wife+a screaming toddler with the woman sitting next to me trying to teach these ppl how to bring up their toddler! At the same time, a man walked down from the upper deck complaining that there were ppl standing on the upper deck!

He somehow tapped his card more than he should, still complaining about the ppl standing and arguing with the poor driver who tried to tell that he had to go to an MRT Sta to explain the situation as the bus driver was unable to reverse what was charged. He just kept complaining relentlessly and holding a line at the stop where ppl were trying to get on. Eventually the driver had to tell him to get off the bus.

Such a headache by the time I got to the peace&calm in my own 4walls that I had to take a nap! And ppl ask why I prefer not going out in the weekends!! A reminder to not forget ear-plugs for my flights!!!

Sun: Happy Earth Day to all. Strange (if you use your imagination!) cloud formations on my way to a yummy lunch at nephew’s place. Did not have the energy or mood to be out with the weekend crowds, especially after yesterday, but wanted to see family before heading off. Tkx to Leo for stopping by to pick up the old Acer laptop, hope that it can be salvaged!

Mon: glad to leave these barricades, constructions and mess behind. Also quite prepared that there will be some dust within my 4walls when I return. Doing my best to cover up the place, but dust will be dust and gets everywhere unless things are sealed. These are the stuff on and with me the next 6months, will manage fine as there are 2bags in storage, one in Norway and another in the US.

Tue: 2018 paths crossed and to cross starting this morning bright&early flying 14hrs from SIN-London and staying one night there before heading to Oslo.
Jan-Mar: Red
Apr-Oct: White/Air, Green/land
Dec: Black/tentative