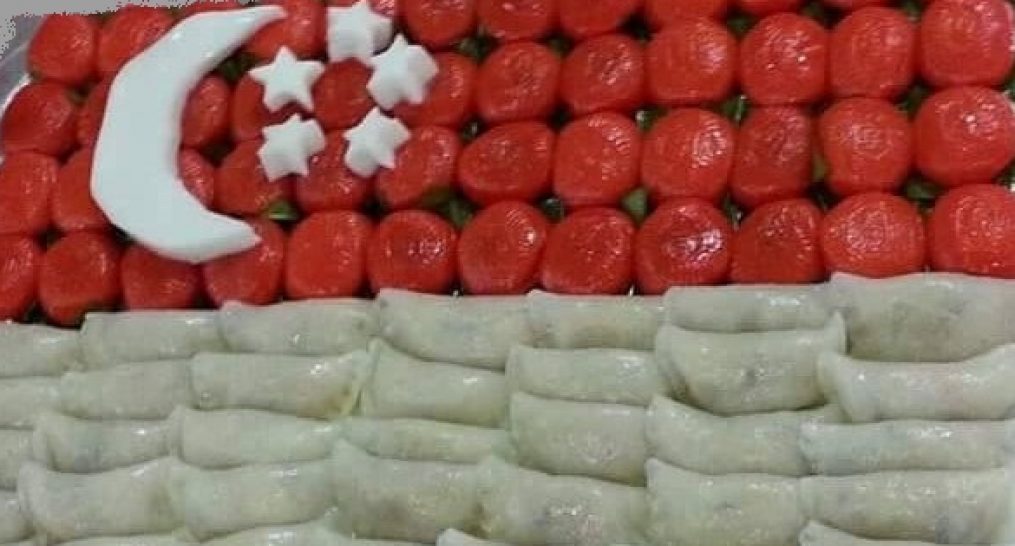 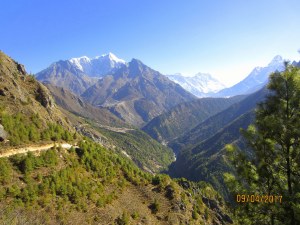 Ups and downs crossing more suspension bridges and the river, thru’ rhododendron forests.

Lunch break down the valley@Paradise Lodge&Restaurant, a newer place and nice to be able to take an early lunch and nap before heading by the water-wheels and check-point and then up up up for 4k.

Met someone playing the flute during a break and he had a nose-bleed. Gave him all my tissues and wet-naps supply for the day.

After the last 4k of ups ups ups (took me 4hrs) was finally@Tengboche Monastery&Hotel Himalaya 1600hrs, where we will be spending the night. Was sooo tired that all I wanted to do was sleep, but did pay a visit to the monastery first.

Managed to get a few shots before the sunset. Was even too tired to go outside to take this sunset scene, so imagine how bad a shape I was in to miss a good shot of the sunset. Oh well, even with the reflection of the window, Sagarmatha will hold a special place in the memory.

Mon 10Apr 0930hrs: after a poor night sleep with the heart and head not feeling happy, it would be wise to turn around here. As the Norwegian saying goes – det er ingen skam å snu. Looking at the itinerary planned, it would have been unlikely to make it any further and I needed to conserve some energy head back. Lum made the same decision as he was coughing. Calvin&Sam pushed on with Kumar and the younger porter. My fav pix of Sagarmatha and the closest I will ever get.

Such spectacular views will remain as long as the memory is in tact.

Heading slowly with our older porter Samip and Lum from Tengboche to Kyangyump arr 1430hrs after 10k . still above the 3,000m for a night. Nice to have the time to take many Kodak breaks to cherish the moments. One picture is worth ten thousand words – Chinese Proverb

Tue 11Apr 0815hrs: proceeding to Namche arr 1030hrs after 8k where Lum was so out of it that I thought a chopper had to be called. Fortunately he slept for hours and felt better.

Fri 14Apr: being in the Buddhist country, nearly forgotten that it is Good Fri. Checked into the airport and flight was supposed to take off after 0900hrs. A few flights took and then none after 0930hrs. Airport closed due to wind, but did not effect the choppers. Hiring a chopper cost anything from US$1,600+

Waited and watching life goes by was more affordable!

Left the airport to have lunch@Everest Mt Home, only a few steps away and has a view of the landing strip where I could see any plane or chopper landing. All’s well that ends well – the airport opened after 1500hrs and we were back in KTM by 1600hrs. Goodbye and thank you Sagarmantha.

Feeling blessed to have been able to trek 34k to an altitude of 3,860m/12,664ft in 6 perfect weather days (including 1rest day) was more than I would have hoped.